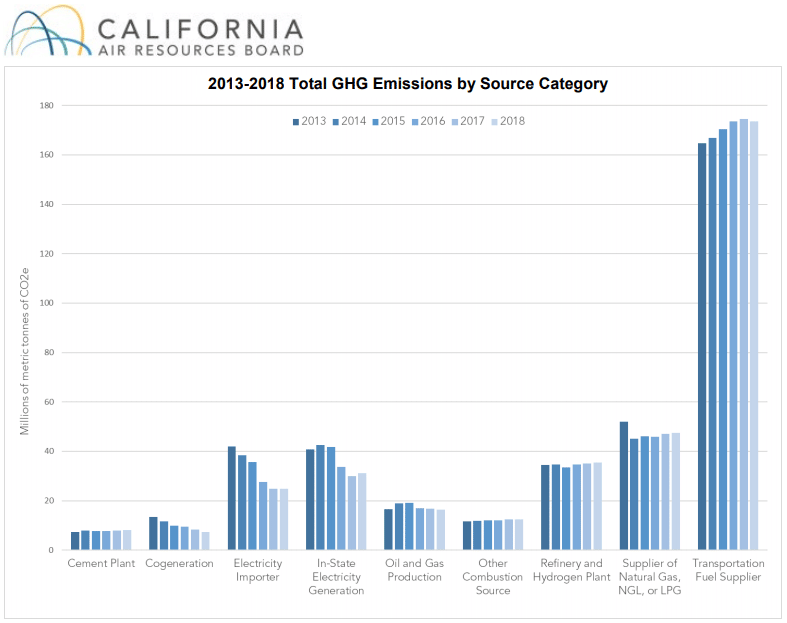 The California Air Resources Board on Nov. 4 announced that all entities subject to the cap-trade emissions reduction system met their compliance requirements in 2018, which marks the first year of the program’s final three-year compliance period. Businesses covered by the program account for about 80 percent of the state’s emissions. The agency also reported that the state is on track to reduce emissions to 1990 levels by 2020, a goal set by the 2006 Global Warming Solutions Act. Greenhouse gas reporting data for 2018 show a reduction in emissions from oil and gas production, as well as tailpipe exhaust from gasoline- and diesel-powered vehicles.

The agency’s mandatory greenhouse gas reporting regulation, which collects data annually from major industrial sources, transportation and natural gas fuel suppliers, and imported electricity, shows that emissions continued to remain below 1990 levels in 2018. There is a minute rise in reported emissions of 0.05 percent, “essentially holding steady” and at a level that continues to keep the state on track to meet the 2020 target, the agency said. Oil and gas production emissions dropped by 2.3 percent, while tailpipe emissions of transportation fuels by trucks, cars, and other vehicles powered by gasoline or diesel, fell by about 0.5 percent.

Cap-and-trade, a market-based emissions reduction program, took effect in 2012 and forms a core component in California’s climate strategy to meet the 2020 goal. Other initiatives that work in tandem with the carbon-trading program are Low Carbon Fuel Standard, the Renewables Portfolio Standard and the Advanced Clean Cars program. The state’s 2030 target is a 40 percent reduction below the 1990 levels.

The program places an economy-wide, declining cap on major emitting sources, and allows entities to trade permits to achieve statewide greenhouse gas reductions. Last month, the Trump administration sued the state’s cap-and-trade agreement with the Canadian Province of Quebec in 2013, citing intrusion into the federal government’s responsibility to conduct the nation’s foreign affairs. The program survived a legal challenge in 2017, putting an end to years of litigation over the legality of the initiative and has remained steady despite the withdrawal of Ontario from the multi-jurisdiction compact last year.