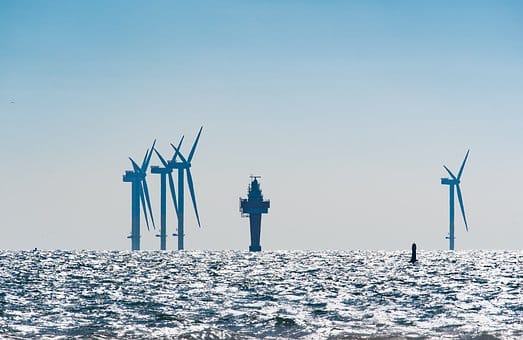 The New Jersey Board of Public Utilities selected Denmark-based Orsted A/S to develop a 1.1 gigawatt wind project, known as Ocean Wind, off the coast of Atlantic City, according to a June 21 press release. The project, which marks the first step towards meeting the state’s 3.5-gigawatt goal by 2030, is estimated to generate $1.17 billion in economic benefits.

The project offered a price of $98.10 per megawatt-hour for offshore wind renewable energy credits, or ORECs, in the first year of operation. The actual costs paid by ratepayers after energy and capacity revenues are refunded, is estimated at $46.46/MWh, raising residential monthly bills by $1.46. Commercial and industrial customers will see a bill increase of $13.05 and $110.10, respectively. Last December, the agency adopted a rule establishing ORECs and detailing a process to fund the state’s offshore wind program and flow back revenue to ratepayers.

Ocean Wind is backed by a memorandum of understanding between Orsted and Public Service Enterprise Group, which will provide energy management services and potential lease of land during the project development and execution phases. PSEG can choose to become an equity investor in the project, according to Orsted.

The board also considered applications from two other developers – Norway-based Equinor ASA and a joint venture between EDF Renewables North America and Shell New Energies US LLC. The agency found that Orsted presented the most detailed development plans and the most complete environmental protection plan, while also offering the most benefits to the state.  Orsted provides the “best chance of successful development,” the board said, considering the developer’s global and regional experience and advanced planning stage.

Regulators issued the award before July 1, in order to allow enough time for the developer to qualify for the federal tax credits scheduled to expire at the end of 2019. These credits are expected to cover 12 percent of the total project cost. Orsted plans to begin construction in the early 2020s and complete the project in 2024.

New Jersey opened the application process last September, launching the largest single-state solicitation for offshore wind, less than a year since Gov. Murphy signed an executive order intended to jumpstart the stalled industry. Murphy has also asked the board to consider additional 1.2-megawatt solicitations in 2020 and 2022 as part of the 2030 target.

In April, Democratic Governor Phil Murphy announced the creation of a free online portal where investors exploring offshore wind-related projects in the state can locate New Jersey-based companies to partner with or purchase from. To speed up the development of the registry and ensure that it is capable of supporting the state’s 1.1-gigawatt solicitation, the New Jersey Economic Development Authority is working with the Business Network for Offshore Wind, an organization dedicated to the development of a U.S. offshore wind industry and its supply chain, to provide free access to the New Jersey portion of the network’s supply chain registry.