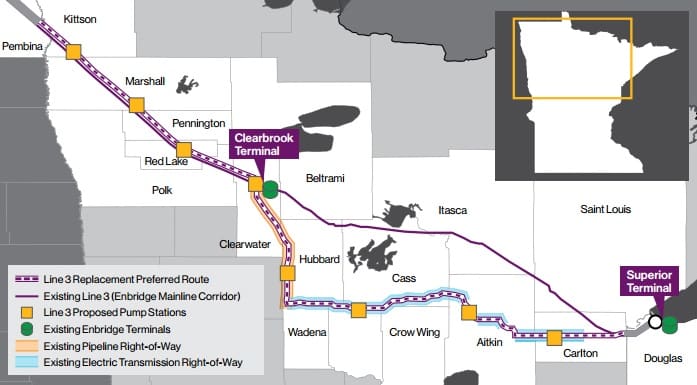 The Minnesota Pollution Control Agency and Department of Natural Resources said they may not take final action on Enbridge Inc.’s permit applications for its Line 3 replacement project until the deficiency in the environmental review of the proposed oil pipeline is addressed, according to a June 18 news release. The announcement follows a recent ruling from the Minnesota Court of Appeals that the project’s environmental impact statement was inadequate.

The court found that the review failed to consider the potential impact of an oil spill in the Lake Superior watershed and remanded the issue back to the Minnesota Public Utilities Commission. The Pollution Control Agency said it will not be releasing draft permits on the water quality certification on July 1 as previously scheduled. The delay will allow the agency to consider the additional environmental analysis before commencing its public comment process.

Last October, the commission issued an order approving the project, following a favorable vote in June. The approval came after much deliberation over replacing a 1960s-era line versus limiting environmental risks. Environmental groups have strongly opposed the project, arguing that it risks spills in the Mississippi River headwaters region and would increase the flow of tar sands crude oil from Canada to U.S. refineries.

The Line 3 project is designed to fully replace 1,031 miles of pipeline between Hardisty, Alberta, and Superior, Wisconsin. The C$5.3-billion Canadian portion of the project is nearing completion, while the majority of the US$2.9-billion American portion awaits final permitting, according to Enbridge. The Wisconsin segment of the project entered into service last May.