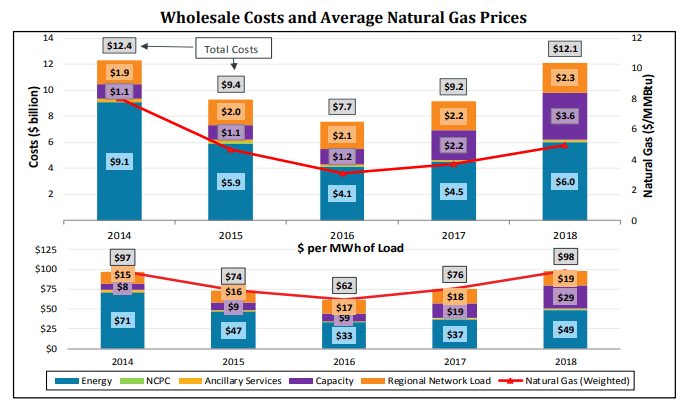 The total wholesale cost of electricity in the ISO New England Inc.’s markets was $12.1 billion in 2018, about 32 percent higher than the previous year, according to the grid operator’s annual market report released on May 23. The report said that the overall performance of the region’s capacity, energy, and ancillary service markets was competitive. The forward capacity auction procured surplus capacity for the fifth year in a row.

Energy and capacity costs accounted for 98 percent of the increase:

Capacity costs are expected to decline after June, as new resources enter the market with the higher capacity surplus applying downward pressure to prices. Lower clearing prices in the last two auctions resulted in significant amount of retirements. In the recent February auction, nearly 600 megawatts of existing capacity retired, and over 1,500 megawatts exited the market for a one-year period.

The report found that the participation of state-sponsored resources with out-of-market revenues and the retention of resources for their energy security attributes have been negatively impacting price formation. To address the issue, the February auction introduced “Competitive Auctions with Sponsored Policy Resources,” or CASPR, which provides a market-based mechanism for these resources to enter the market while maintaining competitive prices in the primary auction. Although the measure helps mitigate the price-suppressing impact in the first year, the report notes that these resources could be price-takers in subsequent auctions, suppressing clearing prices in the long-term.

The reliability retention of resources are based on their energy-security attributes, which are currently not explicitly valued in the capacity or energy market designs. ISO-NE retained Exelon’s Mystic 8 and 9 resources totaling about 1,400 megawatts of capacity in the recent auction to satisfy a reliability need for energy security. Going forward, the grid operator has proposed an interim measure to compensate for energy security, and is also developing a long-term market-based approach.