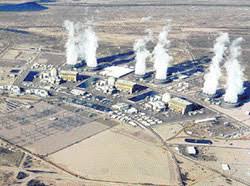 A 26-member coalition of consumer and environmental groups on April 22 asked the New Mexico Public Regulation Commission to examine the ratepayer impacts of the Public Service Company of New Mexico’s planned purchase of its expiring leases of the Palo Verde Nuclear Generating Station Unit 1 and Unit 2 in 2023 and 2024, respectively. The petitioners expressed concerns that the move would burden ratepayers with over $1billion, in addition to decommissioning and capital improvement costs.

Petitioners also pointed out to the 345 bids that PNM received in response to its 2017 request for proposals, which may also change the calculation of the cost-effectiveness of buying the nuclear unit leases.

PNM’s purchase will extend the use of the facility for ratepayers for 23 years at a cost of $1.3 billion for Unit 1 and $120 million for Unit 2. The petitioners sought expedited action, noting that PNM must communicate to the lessors whether it will buy the expiring leases of the 104-megawatt Unit 1 by January 15, 2020 and the 10-megawatt Unit 2 by January 15, 2021, respectively.

Public Service Company of New Mexico is a subsidiary of PNM Resources Inc.