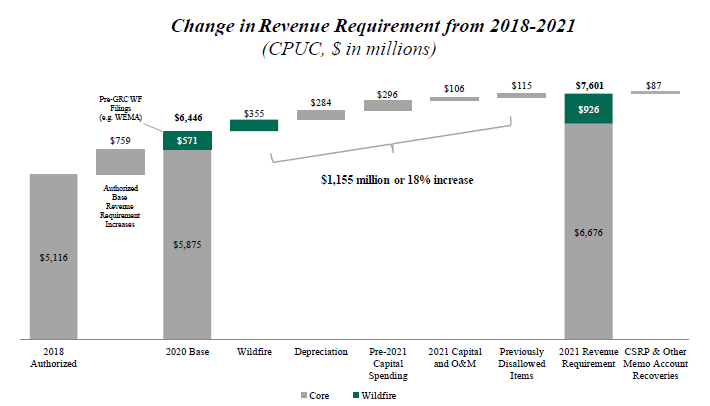 Southern California Edison Company asked the California Public Utilities Commission to authorize a revenue requirement of $7.6 billion to become effective January 1, 2021, according to an Aug. 30 filing. The request represents an increase of nearly $1.3 billion, or 20.1 percent, in 2021 over currently authorized and requested base rates, including sales reductions and one-time memorandum accounts recoveries, the company said. The company seeks rate recovery for capital expenditures of $833 million for wildfire risk mitigation and insurance, and $863 million for operation and maintenance expenses.

The company said that the increase is larger than the requests sought in the recent past due largely to dramatic increase in wildfire risk, resulting in a “new normal of year-round and potentially catastrophic wildfires.” Although revenue requirement for core business operations have been relatively flat or even declining over the last several rate case cycles, SCE said that an overall increase is needed to undertake measures to reduce wildfire risk, as set forth in the Grid Safety & Resiliency Program and Wildfire Mitigation Plan filings.

The request excludes $1.575 billion in wildfire-related capital expenditures, in accordance with legislation enacted in July that directed the three large investor-owned utilities from including in their respective equity rate bases the collective first $5 billion of capital expenditures incurred pursuant to a commission-approved wildfire mitigation plan. SCE will recover its share of 31.5 percent, or $1.575 billion, through a subsequent financing application.