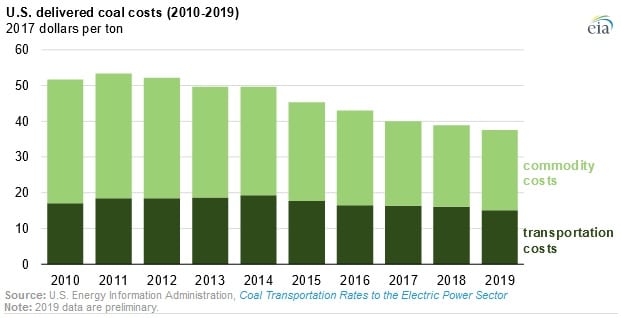 U.S. coal shipments to the power sector declined for their fifth straight year in 2019, down to the lowest value, according to a May 12 report from the Energy Information Administration. Nearly 70 percent of coal delivered to the U.S. electricity sector last year was transported completely or in part by rail.

Coal delivery costs, which include commodity and transportation, saw a steady decline over the last decade. Commodity costs fell faster, due to which transportation’s share of delivered costs has risen since 2008, when it represented one-third of the total cost. Transportation costs accounted for 40 percent of delivery costs across the country in 2019, after the average price dropped from $16.07 per ton in 2018 to $15.03.

Transportation costs are affected by factors such as route length, availability of transport mode and supply options, and the competition between coal and other commodities for transport. While transport costs by river barge remained steady, both rail and truck transportation experienced a decline in costs, with the latter decreasing by 17 percent after 2 straight years of increase.

The sector received 547 million short tons of coal in 2019, about 38 MMst less than the prior year. Rail accessibility and plant location are mainly used to determine how a power plant receives coal. The most cost-effective means of transporting large quantities over long distances is by river barge, but it is limited since most plants are not located on suitable rivers. Transporting by truck is only cost effective over short distances since most mines are far from power plants.

Although transportation by rail is more expensive  compared to truck or river barge on a per-tonnage basis, it is a cost-effective way to transport large quantities of coal from the few remote production areas to power plants. Nearly all coal in the U.S. comes from four regions spread across eight states. Coal shipments to the electric power sector dropped by 38 million short tons to 547 million in 2019, the fifth consecutive year of decline, with 69 percent delivered by railway and the remainder by river barge, truck and other methods.

Transportation by truck suffered the highest drop, falling by 13 percent from 2018-2019, while rail and river barge shipments had more moderate drops of 6 percent and 2 percent, respectively, over the same period.