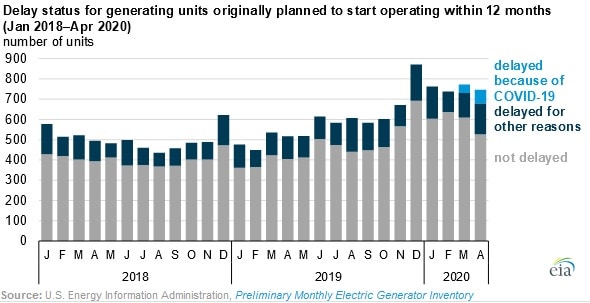 U.S. electric generators experienced more delays in commercial operation dates in March and April partly due to the COVID-19 mitigation efforts, according to a July 15 report from the U.S. Energy Information Administration. Restricted travel of specialized workers, along with supply chain disruptions and permitting challenges increased the risk of project delays.

According to a survey conducted by the agency, 163 out of 772 proposed generating units delayed their operational date in March —  41 units, or approximately 25 percent, attributed the delay to the COVID-19. In April, 220 of the 746 proposed units were delayed, with 67 of these attributed to the pandemic. During these two months, generation delays caused by COVID-19 account for 18 percent of the total delayed capacity, representing 3.1 gigawatts. The median delay was two months regardless of the causes reported.

Among all stages, projects in the construction stage were more vulnerable to experience delays due to the pandemic. Sixty-one projects under construction with a total generating capacity of 2.4 gigawatts were delayed during March and April, accounting for nearly 40 percent of the total suspended generating projects.

As for the generator’s type, solar photovoltaic (PV) projects were affected the most  by the pandemic. According to the agency, there were 53 unique solar PV projects delayed, which translates to 1.3 gigawatts of capacity during March and April. Wind turbine projects were also negatively affected due to the shutdown of local and international component manufacturers.

SOURCE
COVID-19 mitigation has delayed construction of some electric generators