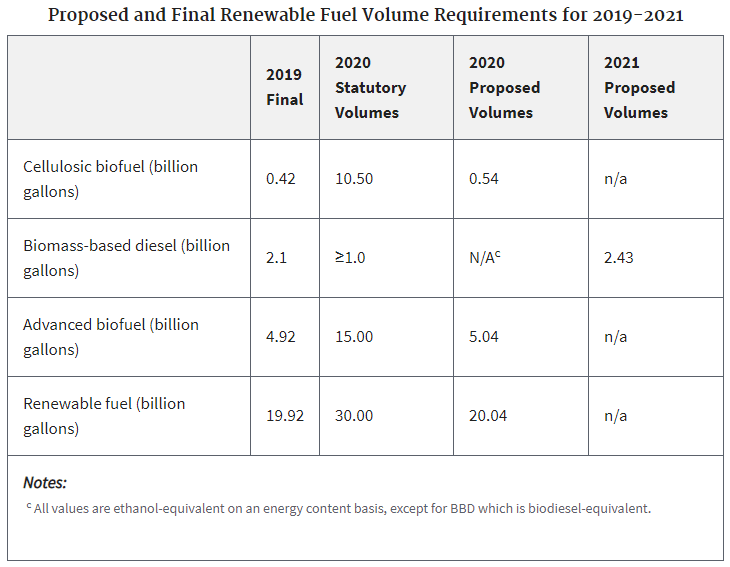 The U.S. Environmental Protection Agency on July 5 proposed set a blending volume of 20.04 billion gallons for 2020 under the Renewable Fuel Standard, up from the current level of 19.92 billion gallons. The proposal would keep the target for conventional biofuel, mainly corn-based ethanol, at 15 billion gallons. However, proposal drew criticism for failing to address small refinery exemptions that hurt biofuel demand.

Iowa Governor Kim Reynolds, a Republican, expressed disappointment over the failure to reallocate the lost gallons due to the refinery exemptions and urged the EPA to “uphold President Trump’s commitment to rural America by strengthening the RFS and putting an end to the abusive practice of granting waivers to profitable oil refineries.”

Monte Shaw, executive director of the Iowa Renewable Fuels Association, pointed out that the “2021 proposed level for biomass-based diesel was flatlined at 2.43 billion,” while the U.S. consumed 2.6 billion gallons of the fuel last year. While the RFS was intended to provide a market driving mechanism, EPA’s proposal sets the volume for two years hence below what the industry already achieved, thereby undermining the purpose of the program, Shaw noted. The association also raised concerns that billions of gallons of biofuel demand will be destroyed each year until EPA stops the abuse of refinery exemptions and reallocates what has already been lost.


The EPA approved 54 small refinery waivers from 2016 and 2017, which have a direct impact on rural America and corn farmers, according to the National Corn Growers Association.