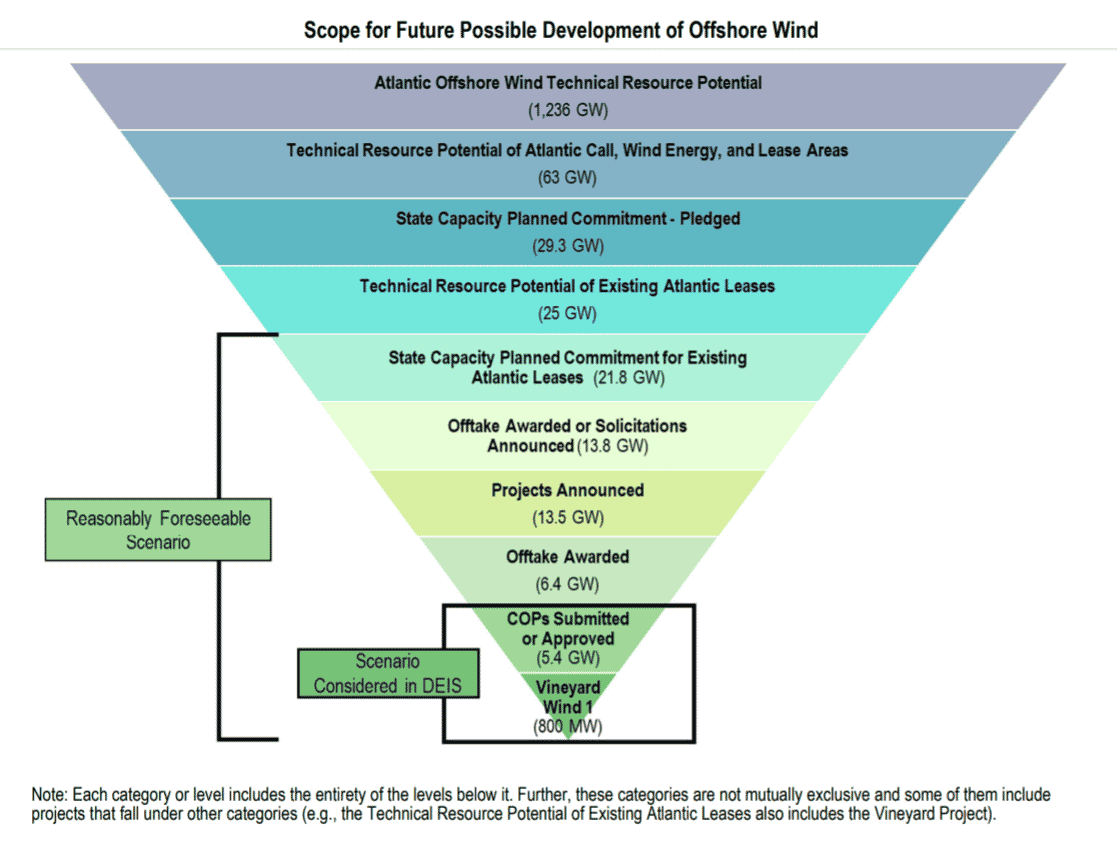 The Bureau of Ocean Energy Management released the long-awaited supplement to the draft environmental review of Vineyard Wind LLC’s 800-megawatt wind farm offshore Massachusetts. Last year, the bureau postponed the final review for the $2.8 billion project, in order to undertake a supplemental analysis to understand the cumulative impacts of multiple projects proposed in the region. The analysis assumes that about 22 gigawatts of Atlantic offshore wind development are reasonably foreseeable along the east coast. The expanded scenario incorporates previously unavailable fishing data, a transit lane alternative, and modifications to the construction and operations plan. The move is a step forward in the permitting process for what would be the nation’s first large-scale offshore wind project.

The AWEA called it the “first in a series of important steps in finally unlocking the enormous potential for offshore wind to deliver clean, reliable power to major population centers in the U.S.” The association urged the administration to finalize the assessment in a timely manner, allowing the industry to invest billions into the economy.

The final approval of the review this fall will have a “domino effect” resulting in the construction of 9 gigawatts by the end of 2030, according to BNOW.

In February, Vineyard Wind announced that the $2.8 billion project will not be able to begin commercial operation in 2022, after federal regulators updated the permitting schedule, setting a final decision deadline of Dec. 18, a delay of more than a year compared to the original schedule’s August 2019 date. Vineyard is a joint venture between Iberdrola’s Avangrid and Copenhagen Infrastructure Partners.

BOEM determined that the proposed action or certain alternatives to the proposal could have major cumulative impacts on commercial fisheries, navigation and vessel traffic, and military and national security uses, and scientific research.

The level of development expected to fulfill 22 gigawatts would result in the construction of about 2,000 wind turbines over a 10-year period on the Atlantic, with currently available technology, according to the agency. The expanded scenario considers reasonably foreseeable development of 17 active wind energy lease areas including named projects and assumed future development within the remainder of lease areas outside of named project boundaries. Assumed future developments are based on state commitments, available turbine technology, and the size of potential development areas. This scope is much larger than what was included in the draft review, which considered in detail projects that had submitted construction plans – about 130 megawatts – in federal waters at that time. A total of 6.4 gigawatts have been awarded to meet state procurements. Together, awarded and announced offshore wind procurements total 13.8 gigawatts.

The analysis, published in the Federal Register on June 12, opens a 45-day public comment period. The bureau will hold five virtual meetings during that period. The agency will issue a final environmental impact statement in November.