U.S. LNG Export Capacity Will Be Utilized At Less Than 50 Percent Through August: EIA 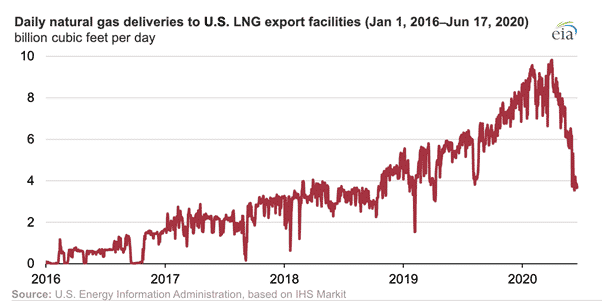 The U.S. daily natural gas delivered to facilities that produce liquefied natural gas for export fell to less than 4 billion cubic feet per day (Bcf/d) by far in June, less than a half of the record 9.8 Bcf/d in late March 2020, according to a June 23 report from the U.S. Energy Information Administration.

The global natural gas demand decline is attributed to the double effects of a mild winter and the COVID-19 pandemic. The high natural gas storage inventories in Europe and Asia and the record low spot prices have also made the situation worse for the U.S. LNG export industry. It is estimated that more than 110 cargoes were canceled forJune-August deliveries.

On the supply side, the U.S. became the third largest LNG exporter on an annual basis in 2019, following behind Qatar and Australia. The total liquefaction capacity in the U.S. is expected to reach 8.9 Bcf/d of baseload export capacity and 10.1 Bcf/d of peak export capacity since more export facilities and systems became operational commercially from 2019.

During January 2020, the U.S. LNG export industry continued to thrive – 74 cargoes were loaded in the U.S. and LNG exports totaled 8.1 Bcf/day – both hit the record highs. The exports declined slightly from February to April, but fell significantly from May. According to the statistics from the agency, 62 cargoes were loaded in April and 52 cargoes in May, and the gross exports were 7.8 Bcf/d and 5.8 Bcf/d respectively, which decreased by 26 percent. The exports are expected to hit a low of 3.2 Bcf/d in July before rebounding in the remaining months in 2020; the export amount is only 40 percent compared to the level in the beginning of the year.

The historical low spot and forward LNG prices of global competitors, such as Japan LNG spot in Asia and Title Transfer Facility, or TTF, price benchmark in Europe also worsened the economic viability of U.S. LNG exports. The higher U.S. LNG spot and futures prices in Henry Hub and the additional tolling fees and transportation costs make the U.S. LNG exports become less competitive in the global market and resulted in several cargo cancellations this summer. The agency expects that the LNG export capacity will be utilized less than 50 percent from June to August this year.

SOURCE
U.S. liquefied natural gas exports have declined by more than half so far in 2020