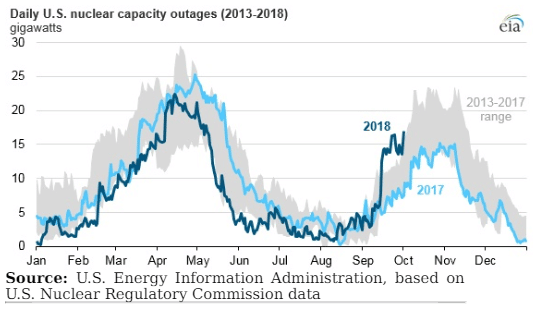 Electric generation capacity losses resulting from nuclear plant outages spiked in early September as a result of earlier than expected maintenance, adverse weather conditions and early retirement, according to the EIA’s latest data. Hurricane Florence caused a nine-day unscheduled outage at the 1,870-megawatt Brunswick Nuclear Plant in North Carolina, which was forced to safely shut down before hurricane force winds and flood waters reached the site. Also in mid-September, the 625 MW Oyster Creek Nuclear Generating Plant in New Jersey, expected to retire on December 31, permanently shut down after the retirement timeline was accelerated by more than a year to coincide with the end of the plant’s final fuel and maintenance cycle.