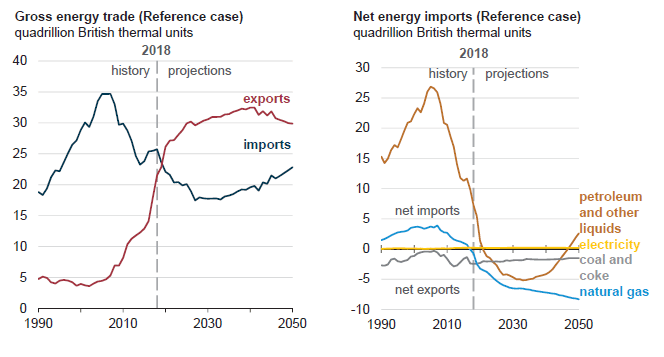 U.S. energy exports in 2020 are projected to surpass imports for the first time since 1953, thanks to the continued growth in petroleum and natural gas exports, according to the U.S. Energy Information Agency’s Annual Energy Outlook released on Jan. 24. The trend is expected continue for the next three decades driven by large increases in the production of crude oil, natural gas, and natural gas plant liquids, amid a slow growth in domestic energy consumption. The U.S. became a net natural gas exporter in 2017 after almost 60 years due to increases in liquefied natural gas export capacity and expansion of the cross-border pipeline network into Mexico. The power generation mix will continue to see a notable shift as lower natural gas prices and plummeting costs of renewables make these resources increasingly competitive, the agency said. Generation from both coal and nuclear is expected to fall over the projection period through 2050, as less economic plants retire.