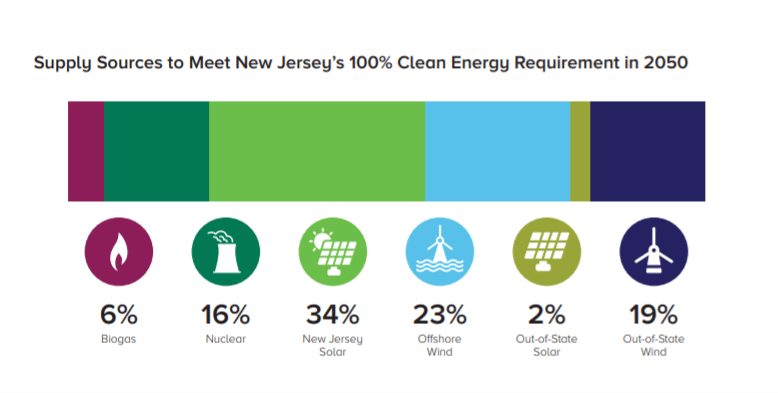 Democratic Governor Phil Murphy on Jan. 27 released a comprehensive plan, outlining strategies to reach the administration’s goal of 100 percent clean energy by 2050 and achieve the target of 80 percent emissions reduction from 2006 levels set by the Global Warming Response Act enacted last year. To support the strategies, Murphy signed an executive order directing the Department of Environmental Protection to adopt a suite of sweeping regulatory reforms, known as Protecting Against Climate Threats or PACT, to cut emissions and adapt to climate change.

The blueprint addresses the state’s energy system extensively, including electricity generation, transportation, and buildings, and their associated emissions. Under the plan, 100 percent clean energy by 2050 is defined as carbon-neutral power and maximum electrification of the transportation and building sectors, the largest emission producing sectors, to meet the Global Warming Response Act mandates.

The PACT regulations, which are two be developed within two years, include establishing a greenhouse gas monitoring and reporting program to identify major emitting sources; establishing criteria to reduce carbon dioxide emissions and short-lived climate pollutants; and, reforming land use regulations to incorporate climate change considerations into permitting decisions.

Based on modeling from the “Integrated Energy Plan,” the blueprint shows that on a least-cost pathway New Jersey could supply 94 percent of its electricity from in- and out-of-state carbon-free resources, and meet the remaining 6 percent with “clean firm” generating resources, which would include biogas co-fired in existing natural gas fired generators, but may include other non-fossil fuel-based technologies in the future.

New Jersey recently doubled its offshore wind generation target to 7.5 gigawatts by 2035. Among other goals, the state seeks to procure 2 gigawatts of energy storage by 2030 and enacted a law earlier this month that sets a goal of having 2 million light duty plug-in electric vehicles in the state by 2035. New Jersey is also advancing efforts to foster community solar and developing a successor solar incentive program. The state’s nuclear plants are set to receive subsidies of $300 million annually for the next three years.