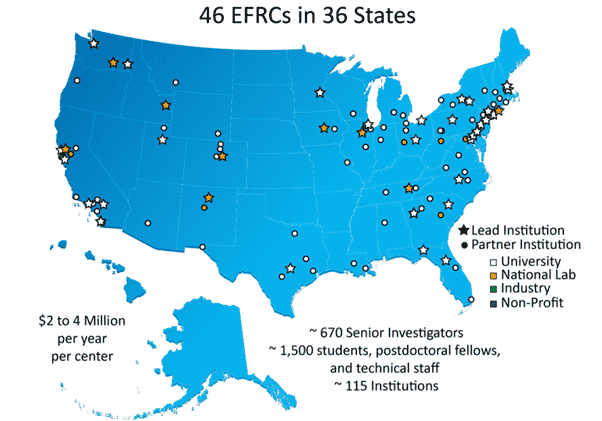 The U.S. Energy Department on July 1 announced $100 million funding for ten Energy Frontier Research Centers over four years to expedite the scientific breakthroughs needed to tackle the energy challenges of the 21st century. The move intends to strengthen the nation’s economic prosperity and energy security.

The centers will bring together multidisciplinary scientific teams and institutions, including universities, national laboratories, industry, and nonprofit organizations to tackle the toughest scientific challenges to advance energy technologies.

Research fields include materials and chemistry for microelectronics and quantum information science, chemical upcycling of polymers, and environmental management. The centers also cover topics such as advanced solar energy, energy generation and storage, and nuclear energy in a broader scope.

The current cohorts of the program, consisting of six new centers and renewals of two existing ones, were selected by competitive peer review. All the eight centers will be funded with an average annual award for about $3 million for up to four years. In addition, another two existing centers were awarded two-year extensions to complete the research in progress. The total funding for the ten centers over four years would be approximately $100 million.

The program was established by the Office of Basic Energy Sciences in 2009 to encourage energy economy and scientific innovation. Since then, more than 12,600 peer-reviewed scientific publications were produced and hundreds of patent inventions have fostered various technologies applied in the industry.