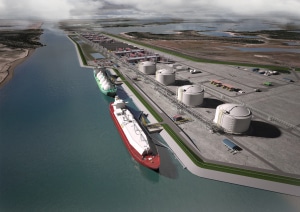 The Federal Energy Regulatory Commission staff issued a draft environmental assessment for NextDecade Corporation’s Rio Grande LNG Project finding that the project would result in some adverse environmental impacts, which would be reduced to less than significant levels, according to the agency’s Oct. 12 announcement. The staff said it has developed other site-specific mitigation measures that will further lower the environmental impact from the project construction. The project, proposed by Rio Grande LNG LLC and Rio Bravo Pipeline Company LLC, would consist of six liquefaction trains with a total nominal capacity of 27 million tons per annum for export and other associated facilities. The Rio Grande LNG Terminal would occupy about 750 acres of a 984-acre parcel of land in Cameroon County, Texas. The Rio Bravo Pipeline System would provide the terminal with about 4.5 billion cubic feet per day of firm natural gas capacity. The staff arrived at the conclusion based on input from cooperating federal agencies including the Army Corps of Engineers, Coast Guard, Energy Department, Transportation Department, Fish and Wildlife Service, National Park Service, Environmental Protection Agency, and National Oceanic and Atmospheric Administration. Rio Bravo Pipeline Company is a subsidiary of NextDecade Corporation. Comments on the draft are due by Dec. 3.